[COLOR=#333333][FONT=Trebuchet MS]I headed into the show a little late on Thursday. I had a couple follow-up meetings at Leica and I wanted to see a few things in between appointments. Specifically, I was interested in two cameras that a lot of people have expressed an interest in, as well as been requested to go see. First, I headed to Pentax to see their medium format DSLR. 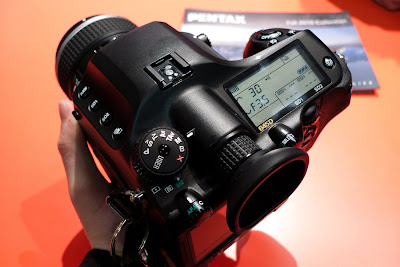 The new 645D from Pentax has really stirred things up in medium format land. A 40 MP, integrated medium format digital camera with many features taken from 35mm DSLRs, and at a price just a couple thousand above the top Nikons and Canons, the Pentax 645D offers a really interesting value proposition. I've downloaded raw files from the Internet and read about the camera, but this is Photokina – I wanted to see and try the camera for myself. So far, from raw images that I've processed, I haven't been blown away with the image quality. Yes, there are a lot of pixels, but to my eye, there is a mushiness in fine details and a haziness in the overall image. I know a lot of people really want the Pentax to be the first affordable medium format DSLR with the latest technology, but to date, the images do not give me the impression of MF. Even the sample photos in the booth, printed at 13″ x 19″ were extremely lackluster. The same blurred details and the same “looking through a dirty window” effect prevailed. Obviously, this is a young product, and the first of its kind for Pentax. Only time will tell if improvements are made to the camera so that it can compete image-quality-wise with the likes of Phase, Hasselblad and the Leica S2. 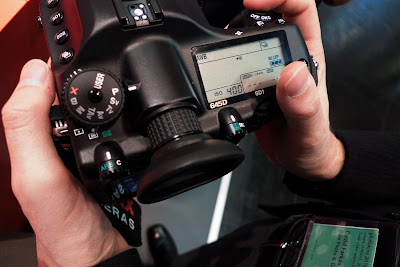 The design is what you might expect. It is a large version of a consumer/prosumer DSLR. Lots of buttons, knobs and dials… 27 to be precise. This particular design approach is not to my personal taste, but many must like it as most of the Japanese camera companies do the same. The majority of the camera body is a large elongated box housing the mirror, shutter and digital components, with a lens mounted on the front and a handgrip coming out of the side. Most would agree this isn't the sexiest camera out there. 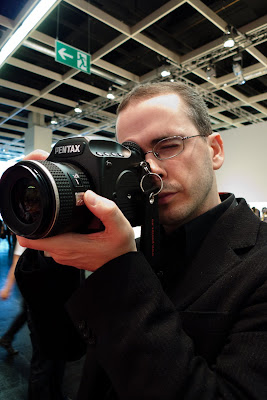 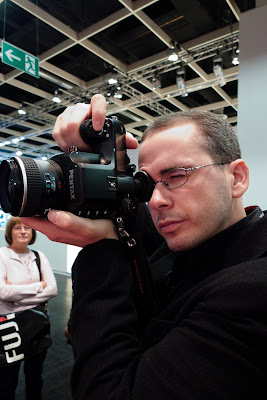 On the rear of the camera there is a 3″ hi-res LCD screen with 922K dots, surrounded by eight buttons, with access to menu, playback, delete, info display, WB, drive mode, flash control and picture styles. To the right there are four more buttons along with a four-way direction pad and a rear thumb wheel. The top of the camera is dominated by a large monochrome status LCD to the right of the tunnel-like viewfinder “tube” and a mode dial. There are also have controls for metering, focus mode, focus area, exposure compensation, and a row of four buttons that run along the edge of the camera's mirror box for SD card settings and bracketing. Metering mode and focus point selection are handled by two twist-type knobs than protrude out the back of camera, flanking the eyepiece. The menu itself has a lot of options and consumer regulars like D-range and picture styles for JPGs. 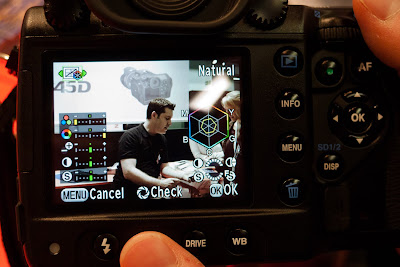 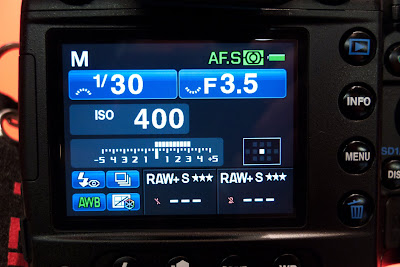 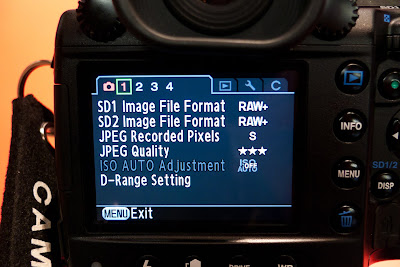 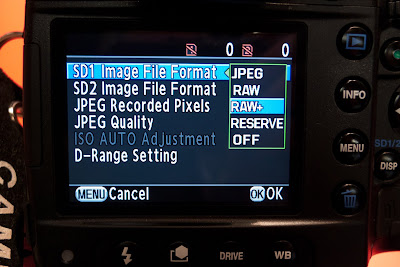 The 645D has 11 AF points, where most MF cameras have one or three at the most. Looking through the viewfinder to see the spacing, all 11 points are clustered together in the very center of the frame. Essentially, I would rather call this a large-area single point as I don't see this making much of a difference at all in real shooting. It is not like a 35mm pro DSLR that has points almost out the edges. I also found that at least in the show hall, the AF was hunting considerably and had some difficulty locking on to the Pentax rep behind the counter.

One of the features I find pretty cool and one I've seen on cameras like the Nikon D3, is a 2D virtual horizon which can be displayed on the rear LCD. A circle is displayed with a horizon line, like in an airplane. Along the x and y axes are bar indicators showing how far off level the camera is. Nice. I'd love for this to be implemented on the S2. 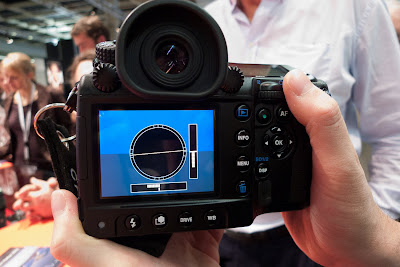 Dual SD cards allow for greater capacity and additional security. The choice to go SD is an interesting one for a MF camera where file sizes can be quite large. Current SD cards cap out at 32GB and my comfort level for SD cards is currently at 16GB. I use these on my Leica M9, but I don't even bother with SD cards on my S2. Instead, I use 400X UDMA 64GB CF cards. The difference between 20MB/s and 90MB/s is significant, both when shooting as well as downloading. A dual CF setup would have been much better in my opinion.

With a look through the viewfinder, I could tell that this was a medium format camera, but it was not as large or as bright as the competition. Phase, Hasselblad and Leica all seemed superior in this regard, but it is always tough to tell without a direct, side-by-side comparison. 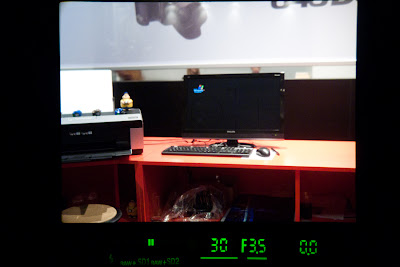 An oddity that I discovered is that while the mirror is extremely well damped, the shutter appears not to be so. I tested this by placing the camera in mirror-up mode to feel the mirror and shutter separately. At the start and end of the shutter firing sequence, there was a definite pull that could be felt in your hand. It is always possible to lock up a mirror to eliminate vibrations, but if the shutter itself is the cause of vibration, this could rob the camera of any resolution advantage it might have over a Nikon D3x or Canon 1DsIII, especially in the vibration danger zone of 1/6th – 1/60th.

Another little niggle was the lens mounting. I removed the 55mm lens and remounted it to get a feel for the mechanics. Not smooth. The lens felt as if it was dragging against the mount. To see how this should be done properly, see the S2, where you get a sense that everything is made to tight tolerances and designed to fit together. I know it's minor, but ergonomics and feel are what a photographer will deal with every day, even before the shots are produced.

For professionals, there is no tethered support. Most amateur users and many pros won't need this feature, but high-end fashion, commercial and advertising photographers depend upon reliable tethering.

I would be very interested in getting a hold of 645D to test, producing my own files and doing a direct comparison to the S2.

Next up was Fuji's “Development Announcement,” the Finepix X100. I went by the booth to see the camera first-hand.

Fuji must really have seen some something they liked in the Leica X1. Their X100 concept camera borrows more than just the first two letters of the model name. With a similar 12.3MP APS-C CMOS sensor and the same fixed focal length lens of 35mm (equiv), the Fuji seems to be squarely targeting Leica on this one. 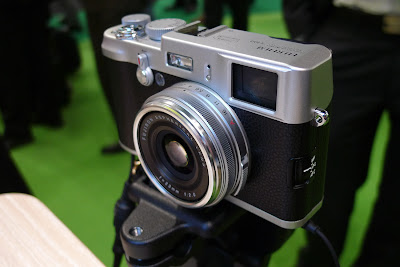 Reading from the brochure I see things like “Made in Japan is tentative. Production plans are not finalized.” and “Sample photos are simulated images.” But, to Fuji's credit, they did have two semi-functional (as long as you didn't want to take a picture) prototypes. I can't report on the weight or feel in the hand for two reasons. One, the two prototype units were both very securely bolted down to display poles. Two, I was told there were no sensors or optics in them either. The image shown on the rear LCD and through the viewfinder were courtesy of a video feed provided through a cable. So, these were not exactly working prototypes, but rather a proof of concept. And a rather good one at that. 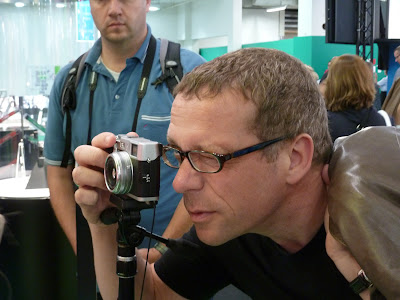 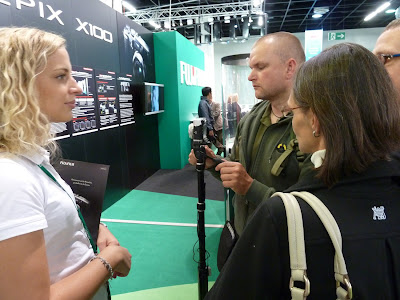 The build quality seemed to be pretty good and the design cues were very Leica-like, albeit more retro ones, with more design similarities to an M3 than an M9. The silver chrome top plate, built-in flash where the frame line illuminator would go, the placement of the shutter speed dial, the black leatherette, even the top engraving. 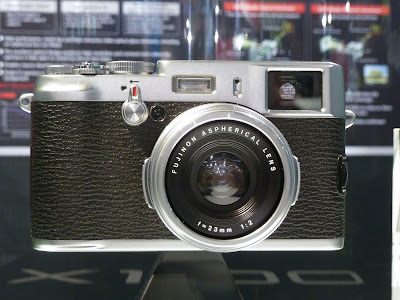 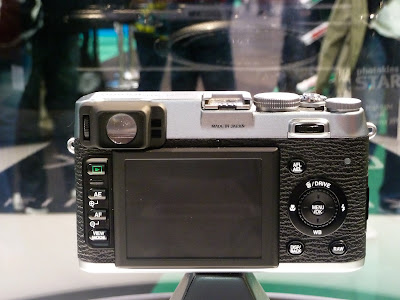 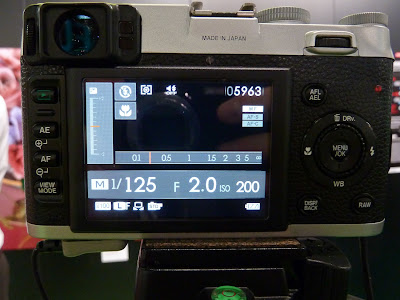 Something that I really liked was the manual aperture control ring on the lens barrel, along with a manual focus ring. Both had a really nice smooth, mechanical feel, not a plastic-on-plastic feeling. Along with the analog shutter speed dial and exposure compensation dial on the top of the camera, I'd feel right at home. 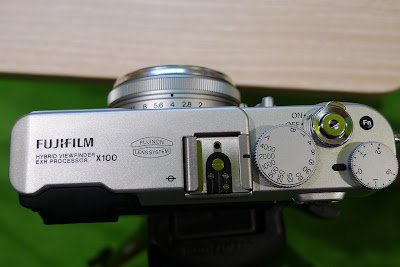 One of the main attractions of the camera is the super hi-res hybrid EVF. At 1.44 million dots, this will be the highest resolution EVF offered on any camera. At least using the demonstration video feed, the quality was amazing. I think (read: hope) within a couple of years this LCD technology will find its way into the majority of cameras. 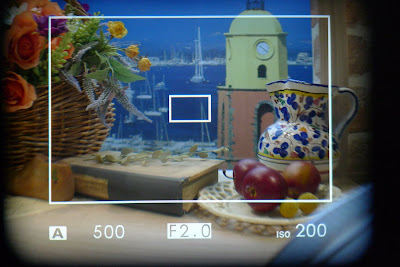 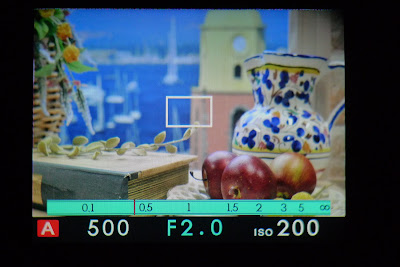 The Leica X1, with its excellent lens and 12.3MP APS-C CMOS sensor currently set the bar for image quality in a compact camera. We'll have to wait and see how the Fuji X100 stacks up image-quality wise when it eventually comes to market. Even the “sample” prints in the booth were not actually from the camera. With no sensor and no lens, it is kind of tough to take pictures, let alone compare image quality. 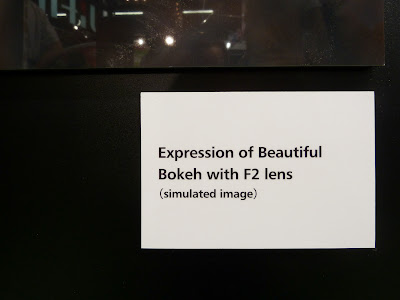