The X System has been an interesting evolutionary process. First, Leica released the X1 along with the M9 and S2 on 9/9/9. The theme of that launch was that the S2 was the smallest medium format camera, the M9 the smallest full frame camera and the X1 the smallest APS-C camera. The 12MP X1 was relatively well-received but had its own shortcomings. A year later, at Photokina 2010, Fuji showed how much they liked the X camera concept of a DSLR sensor in the body of a compact camera with classic styling by showing their own. Heck, they even called their version an X100. The X100 had an APS-C sensor, a 35mm equivalent lens just like the X1 and a two tone look, again, much like the Leica. Not much happened with the X System until the X2 was released in May 2012 at the Berlin Das Wesentliche event. The X2 upped the resolution, kept the same great lens, and addressed many of the shortcomings of its predecessor. The X2 certainly did much better in the market and has proven to be a great little camera. My wife still uses and loves her Paul Smith X2.

But many users wanted a zoom lens and a better screen, among other things. So, in July 2013, the X Vario was launched. Featuring a 28-70mm equivalent zoom and a larger 3” high-res screen with the operational elements from the new M (Typ 240), the X Vario (Typ 107) seemed like an even bigger improvement. Unfortunately, the market didn't necessarily see it this way. The camera was teased as a Mini-M leading up to the launch (and it does bear a striking resemblance to the M). Expectations ran high for a CL-type digital, a smaller optical rangefinder camera, hopefully with full frame. This is not what came and to make marketing matters worse, the zoom lens featured a variable aperture range of f/3.5-6.3. Perhaps if the lens had been just a half a stop faster at f/2.8-5.6 the launch might have turned out differently. Forget for a moment that the lens on the X Vario is probably one of the best zoom lenses Leica has ever made for any camera, and that it was taken on and designed as a personal challenge by head of optics Peter Karbe, or that the $11,000+ 30-90mm S lens has almost the same f-stop range and no one complains. The result was a slow start for the X Vario, but a loyal following for those that were willing to try one out. I carry one with me every day in my “man-purse” ONA bag. My logic is that I get a compact camera with autofocus, usable high ISO, a serviceable zoom range, incredibly good optics, just the right amount of resolution, I can shoot video and I am still getting real Leica images close to the quality of an M9. As proof of its flexibility, just a take a look at 90% of the images on my Photokina 2014 reporting here on Red Dot Forum – they are all done with the X Vario. My video interviews – also done with the X Vario. It’s a good camera, and I’ve been a fan ever since I took one on a family trip for review. I never ended up taking it out of my bag. 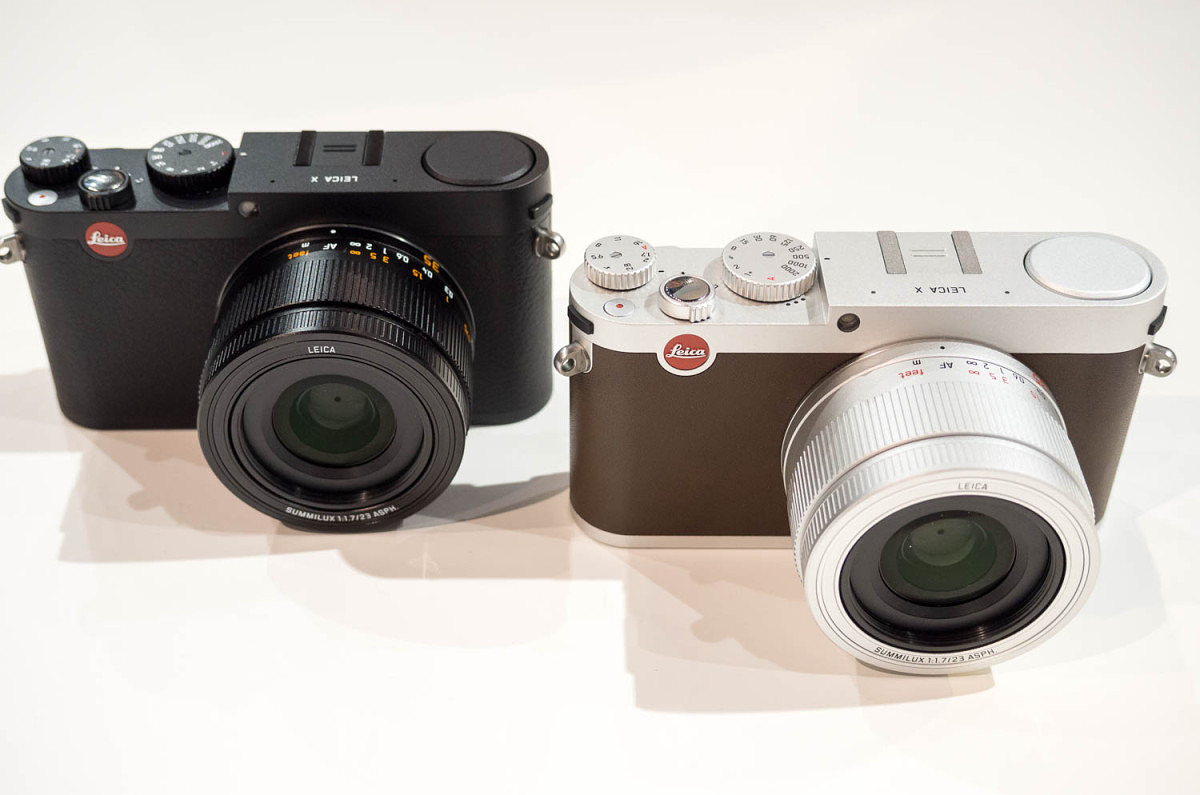 But now that Leica had given its users a really good X camera with a zoom, they wanted a fast prime lens, faster than the 36mm f/2.8 on the X2. And, now they have it. The X (Typ 113) is the culmination of the improved features and body of an X Vario, along with a newly designed 23mm (35mm equiv.) f/1.7 Summilux ASPH. I’m told the lens is a real stunner, and I can’t wait to try one out when I get back to Miami. I’m not sure it will replace my X Vario, but I’m open to the possibility. And lest I forget to mention that this new lens focuses down to a mere 20cm. Oh, the possibilities… 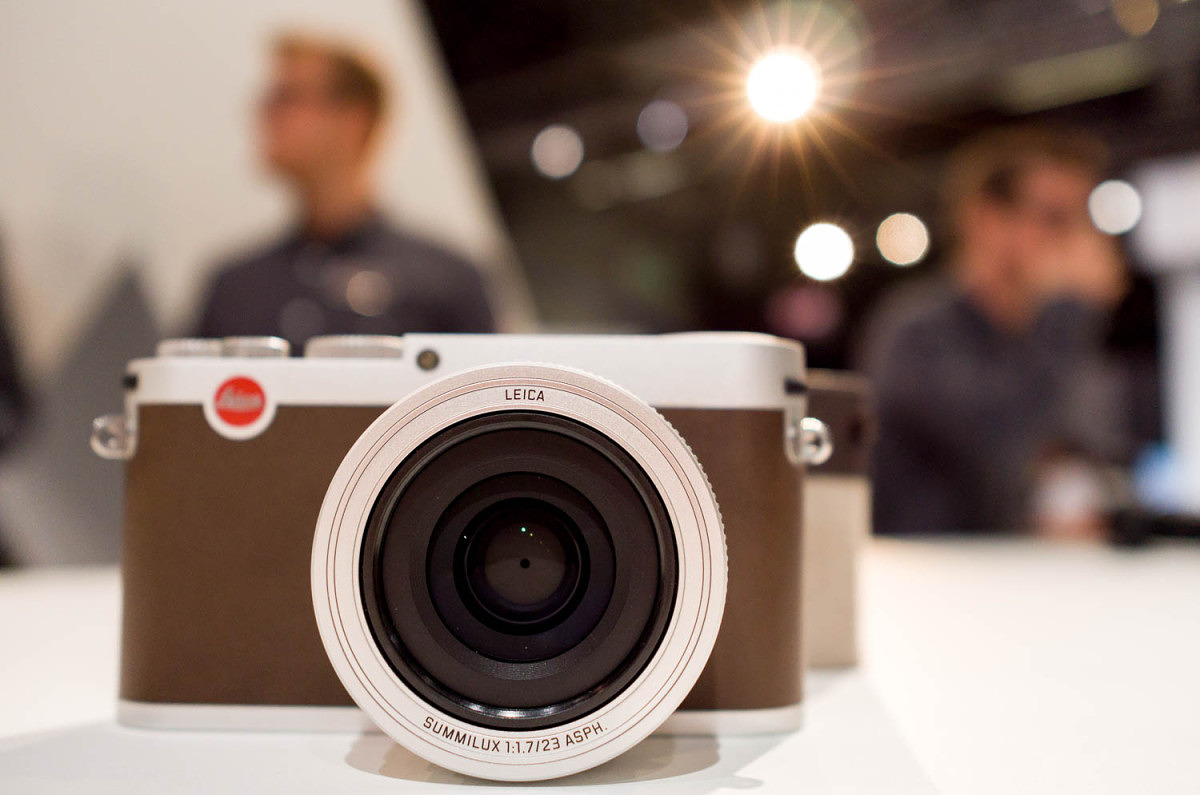 Taken with the new X (Typ 113) at minimum distance

Besides the fast lens, there is one major update to the X 113 from the X Vario. The camera can use the Visoflex (Typ 020), the same 2.4MP EVF that is used on the T (Typ 701). This means that in addition to the nice move from 1.4MP to 2.4MP, the new X will also be able to embed GPS data into the photos when using the Visoflex. The camera also features some nice software updates like improved Auto ISO settings, better navigation through the on-screen GUI and enhanced audio controls for video. Except for the improved audio controls, I requested all of the changes in my initial X Vario review. Thankfully, in concert with the X 113 release, updated firmware is available to all X Vario owners to take advantage of the same feature improvements. 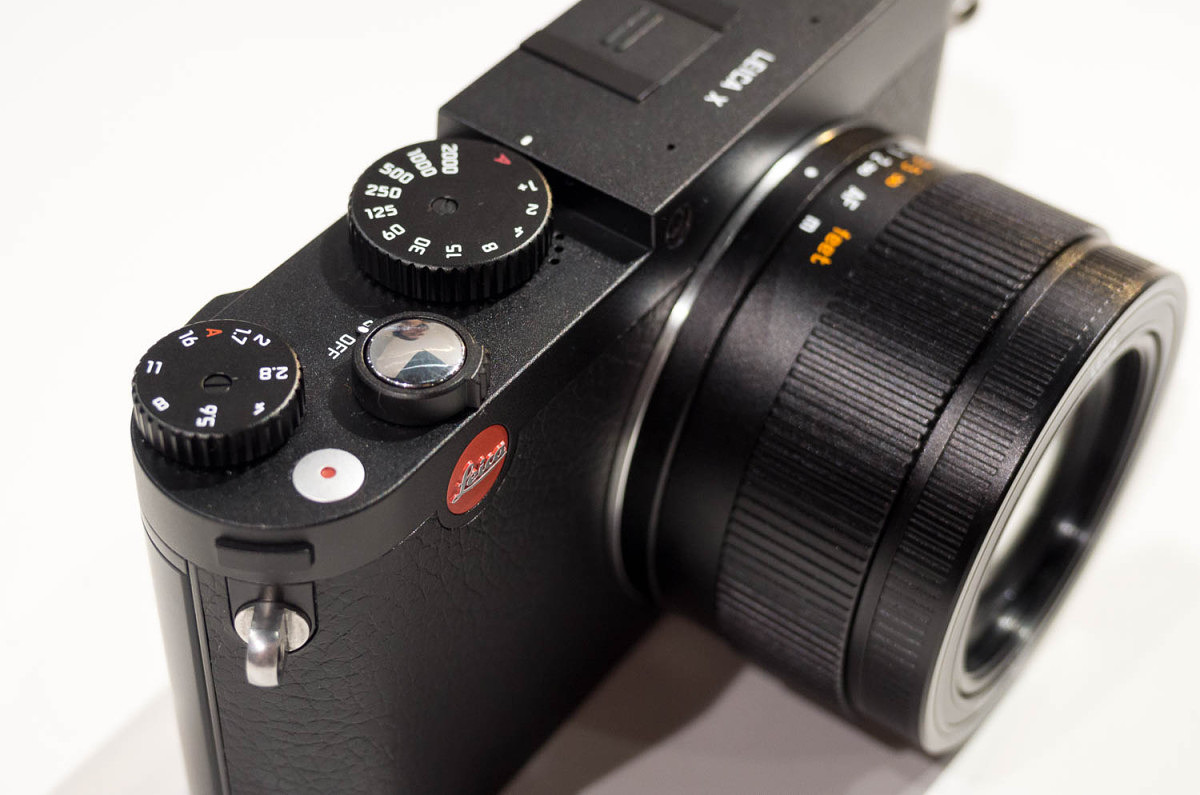 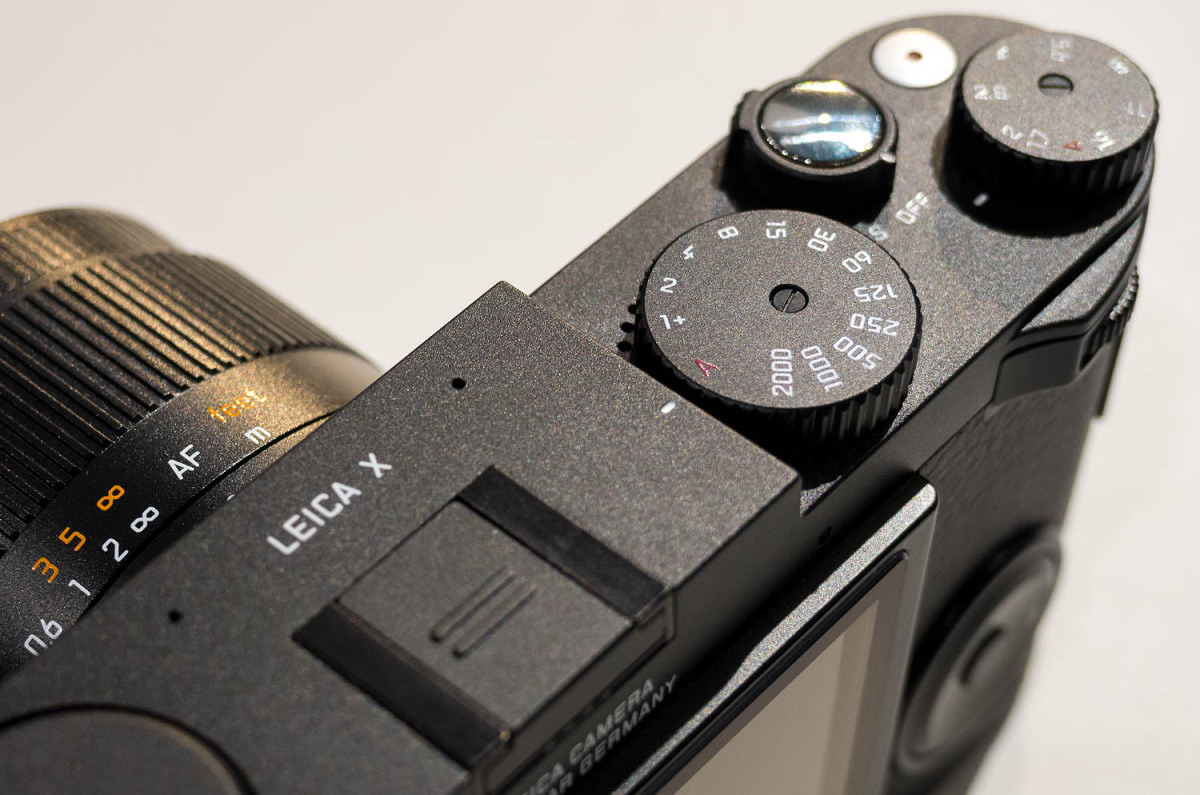 Another nice update is that, in addition to the standard black on black color motif, the X 113 now comes in a super-classy silver chrome with brown leatherette finish. It looks awesome. Leica should really be congratulated for going outside the normal range of options and creating such a stunning camera design. Like the X Vario there are manual dials on top of the camera for aperture and shutter speed and a smooth-turning, wide-ridged ring on the lens for focus with a proper focus scale. All these controls feature an A setting whereby that function can be automatically set by the camera. I love being able to shoot in full auto then easily use the lens in MF mode without ever looking at a single menu. 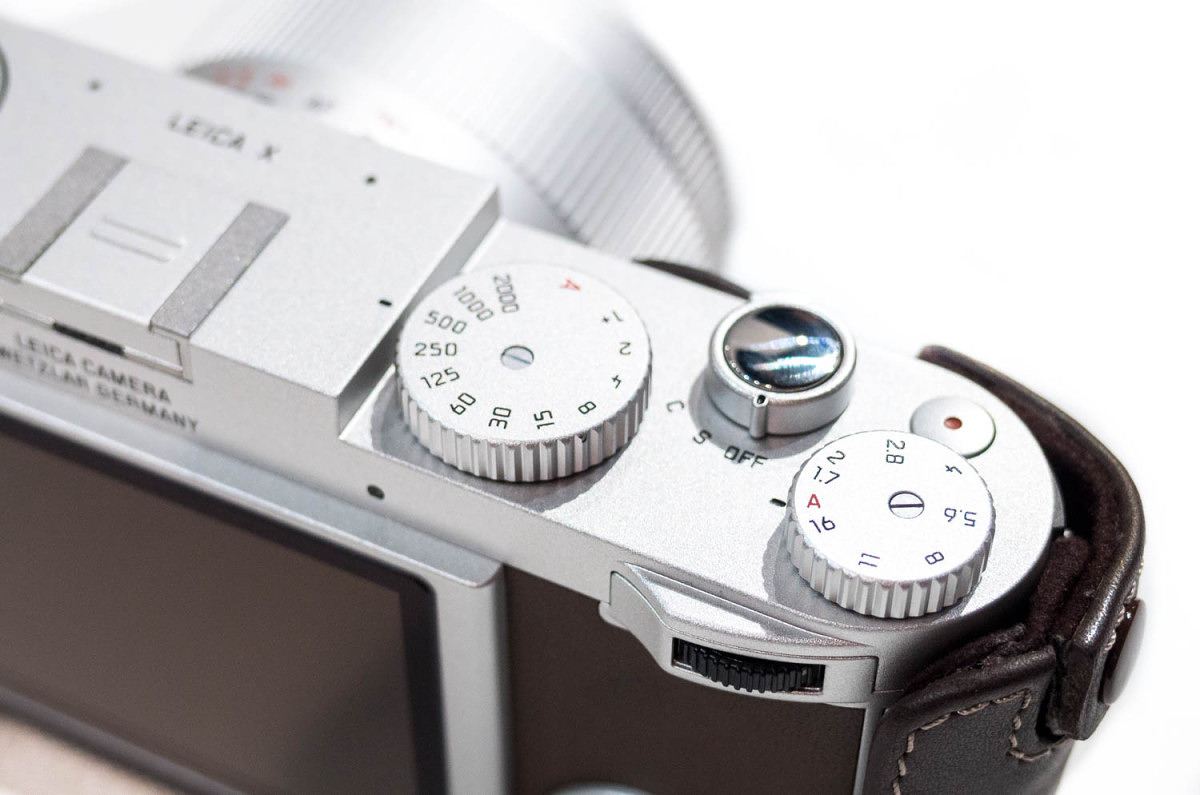 The X 113 camera will run just $2,295, which is a great value considering you’re getting a Leica Summilux lens and solidly-made Leica camera. As I tell people regarding the Vario, just think about it this way, you’re paying for an awesome Leica lens at a fraction of what a similar M lens might cost….and you’re getting a great camera essentially for free. 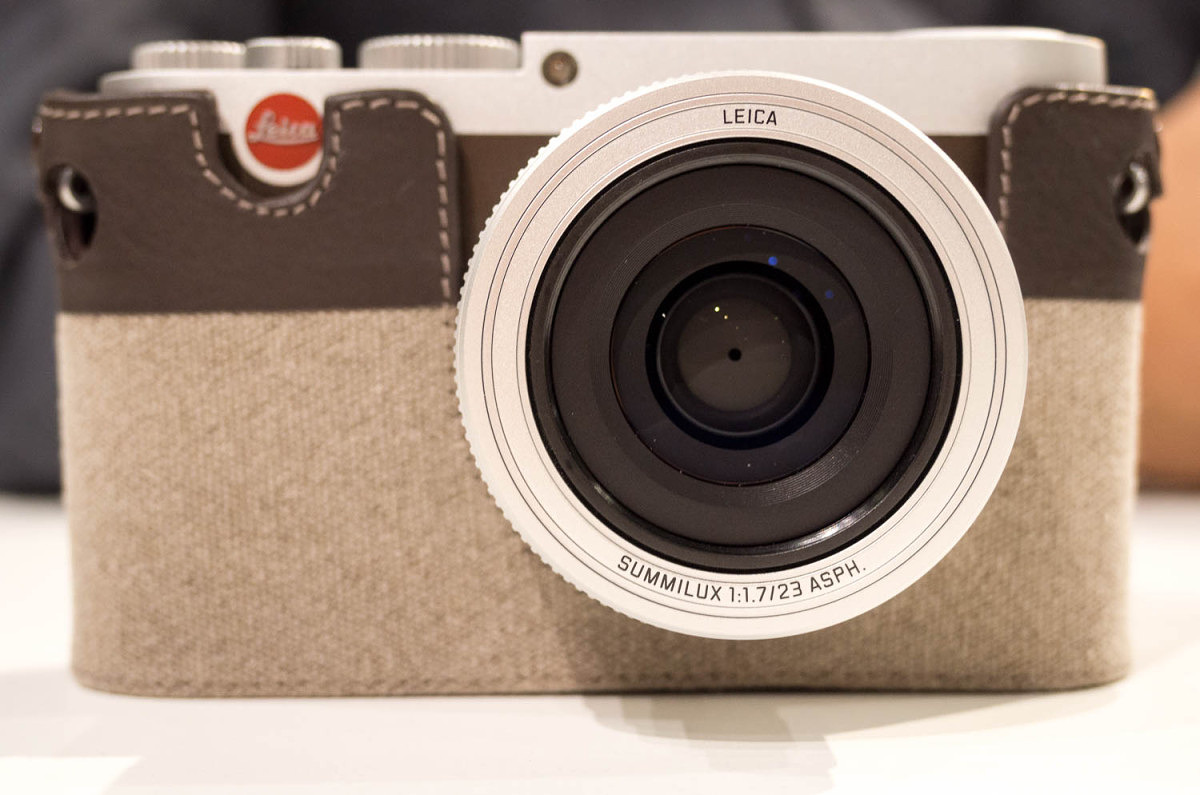 Along with the camera, there are some really sweet cases, both full every ready and half case protectors. For the silver/brown camera I’d suggest the two-tone canvas and leather one that looks like it came off the set of Mad Men. So vintage. So cool. There’s also a matching brown leather strap and two tone Visoflex pouch to keep the look going. 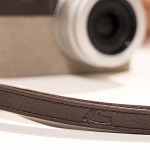 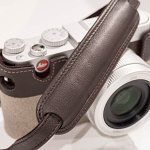 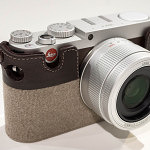 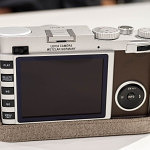 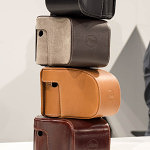 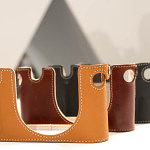 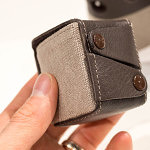 And while the X2 is officially going away, fans of the camera needn’t get too emotional. The X2 will start life over as the very fashionable X-E (Typ 102). Styled in titanium with contrasting silver chrome dials and a textured silver cladding, the X-E looks both sci-fi modern and runway chic at the same time. The price has been dropped to just $1,795, which is downright affordable for an APS-C Leica camera with a lens. The T camera body, which features the same basic sensor, is $1,850 without a lens. 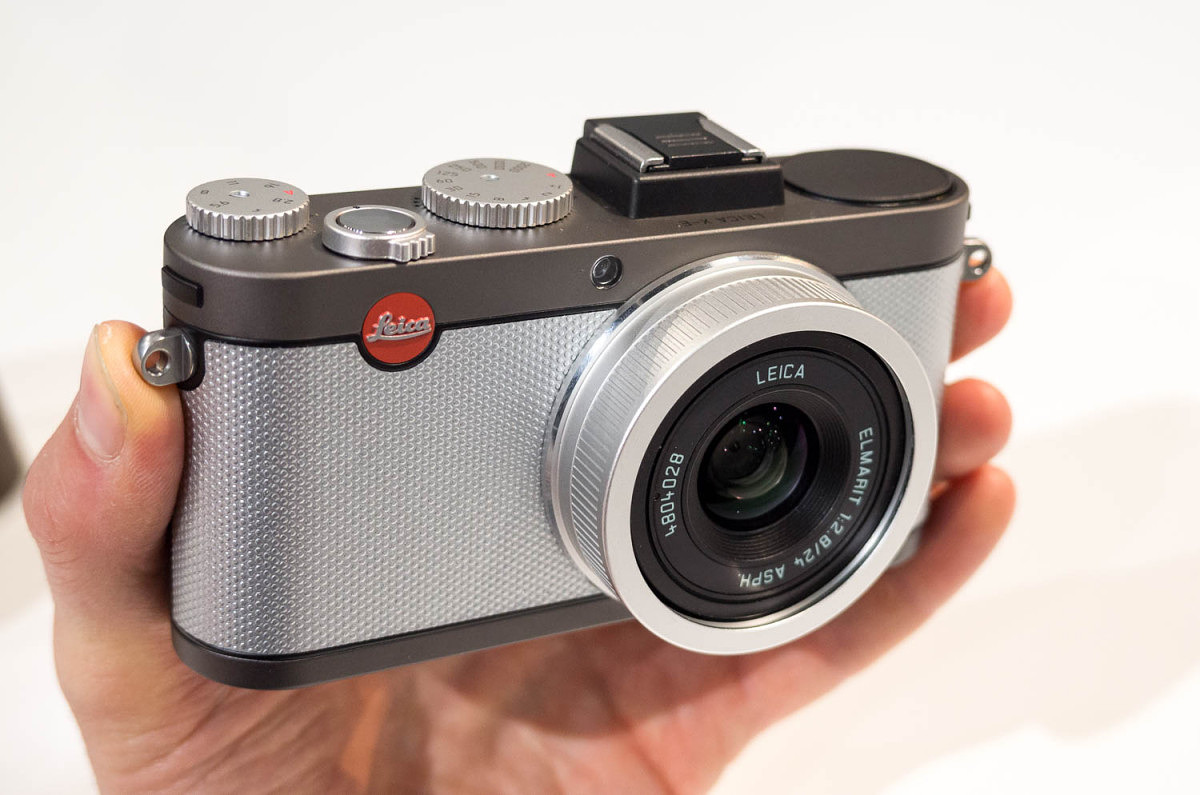 After I had a chance to play around with the new models and some of the cases, I sat down with X and T product manager Maike Harberts. You might recall our conversation not that long ago regarding the design process of the Leica T system.

Let's start off easy. Please tell me about the X-E.

The X-E is basically the X2, but we used the a la carte titanium finish, contrasting silver dials and a new silver textured leatherette. I think it's a bit more space-shippy. And of course, we offer it at an attractive price point.

The X2 was very successful, so now we can offer new customers a more attractive price with a very different style.

Who do you think is the target market for the X-E?

It's not a Paul Smith or a special edition in any way, but it is for a customer who wants good quality but is not shy about showing off personal style. Anyone can have a black camera and be a “serious photographer”, but with this camera you can wear the camera and say, “hey I'm carrying a Leica.”

We offer it in two color choices: black/black and silver/brown.

Of course, we could have put on black leatherette, but it's such a beautiful look with the brown. Brown is not too flashy and goes so nicely with the silver chrome. This is a beauty and appeals to men and women both.

What's the biggest feature of the X?

We embraced what people were looking for, a fast lens on an X camera. And ultimately, we decided to stick to the classic focal length of 35mm.

We also embraced the manual focusing. That was also a demand. With the bigger lens, we now had space to offer manual focus with a wide focus ring on the lens.

We reached out to quite a few customers and realized that 35 is perfect. 50 limits in terms of wide angle. So, we stayed with 35mm. And with the close-focusing abilities, you can just get closer when you need to and still get great Bokeh.

How similar is the new X to its predecessors, the X2 and the X Vario?

From a technical point of view the X Vario and the new X are almost identical. There are of course some minor changes. We had to make some small changes to accommodate for instance the new Visoflex (Typ 020).

The other thing you'll notice is that there is a consistency. A purpose. So when you pick up any X camera you immediately know how to use it. It's extremely easy to understand, whether it is the new X 113, the Vario or an X-E.

What was behind the decision to use the same 16.2 MP CMOS sensor in the new X?

We have such good experience with this sensor. It's a great sensor. It gives us the right resolution and we are very familiar working with it. I would need to see something with much better performance, then we could look at switching for future products. But for now, we really love this sensor.

Does the new X have an AA filter?

I noticed a strange phenomenon when shooting with the X. Why does the lens not shoot at f/1.7 close up? At close distance it only allows shooting at f/2.8.

Thanks a lot Maike. Congratulations on the new products.

You're welcome, David. We hope the customers enjoy the cameras as much as we do.

Keep following my updates from Photokina 2014. There's still more to come! And feel free to post any questions you have for me here or in the forum.