After a full rundown of the changes on the new Leica S camera which I covered in Part 1, I wanted to delve into the three new S lenses. Clearly, the announcement of the 30-90mm and the 24mm came as no surprise to anyone. Leica has been sharing the basic specs for some time now. The 120mm TS-APO-Elmar-S f/5.6 ASPH is a little different story, which is somewhat of a surprise. The lens might look familiar as it is the same excellent tilt-shift macro designed by Schneider Optics. Originally released in Mamiya mount for use on Phase One cameras, we found this lens worked well on the S2 with Leica’s M645 to S adapter. Really, the lens is most useful for table-top photography given its longer focal length. Still, having the lens in native S mount, covered under Leica warranty is not a bad thing at all. Just remember, the lens is manual focus and not weather sealed. This also wouldn’t be the first time that Leica has collaborated with Schneider on lenses. The legendary 15mm f/2.8 ASPH in R mount is a Schneider design. 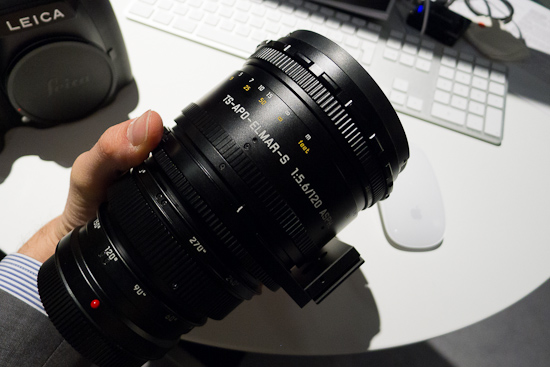 The real story in my opinion are the 24 and 30-90, which really round out the S lens line-up nicely. 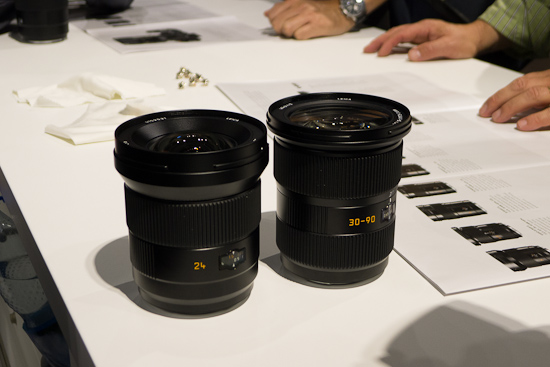 The 24mm Super-Elmar-S ASPH is extremely compact and offers a relatively fast aperture of f/3.5, just a half stop slower than f/2.8. It handles great and according to everyone I talked to in the Leica booth, is quite the performer. Peter Karbe, the head of optics for Leica, believes this lens sets a new benchmark for wide angle lenses in medium format. Distortion is extremely low and fully correctable in LR. Sharpness is outstanding. There is no shortage of exotic glass here – 12 elements in 10 groups, five of which have anomalous partial dispersion, three made from fluoride glass for CA control and three aspherical surfaces. And, by using a floating element design, performance from close focus to infinity is maintained. This lens is going to be phenomenal for interiors, architecture and landscape. 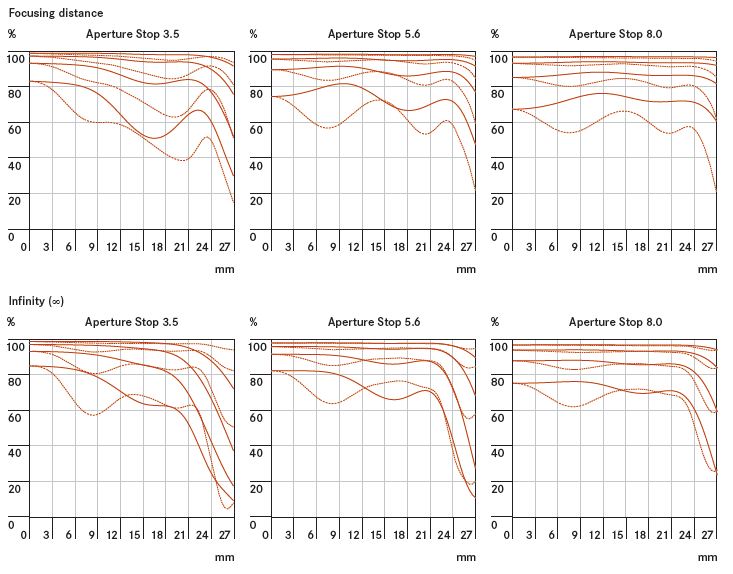 Since the S System came out, everyone has been lusting for the 30-90mm Vario-Elmar-S ASPH zoom. Well, after around two years in development, it’s here. And, it’s worth the wait. 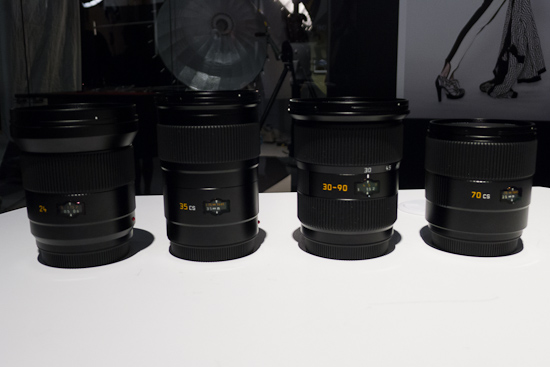 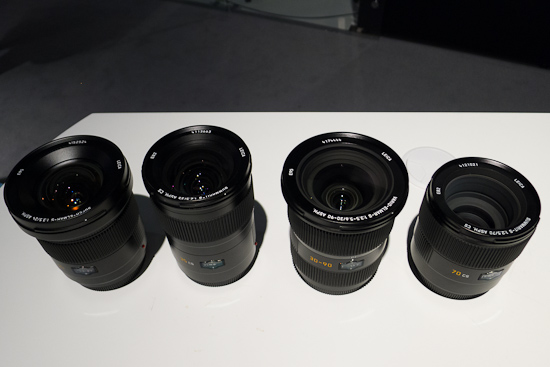 As with any zoom, there are some compromises versus fixed primes. I spoke with Dietmar Stuible, the optical designer of the new lens, who said that while it may appear simple to design a “normal” range zoom, the reality is that is actually extremely challenging to go from wide angle (24mm equiv) to short tele (90mm equiv) and maintain S-quality optical performance. So, the best compromise is to optimize for the middle range, where the lens will see the most use. Here, that is from 45 to 75mm. 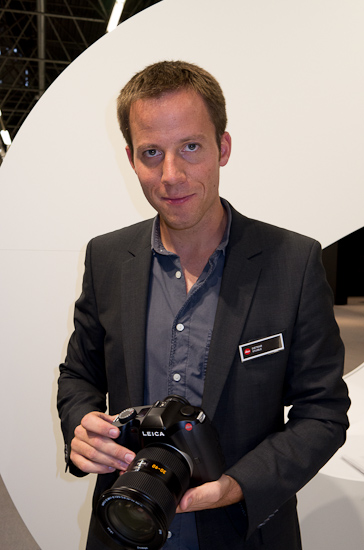 Of, course, this doesn’t mean that the lens is bad in the wide angle range. Quite the contrary, actually. We are talking about resolving 70% contrast for 40lp at 30mm, its “weakest” point in the zoom range. Yeah, not too shabby. Looking at the MTF of the zoom versus the fixed 30mm Elmarit-S ASPH, the MTFs look strikingly similar. At 60mm, the MTF is almost perfect , resolving over 80% contrast wide open for 40lp. The bottom line is that this is a real S lens. Also featuring quite an exotic design, the Vario-Elmar uses 14 elements in 4 groups, of which 9 have anomalous partial dispersion, three fluoride glass elements and three aspherical surfaces. 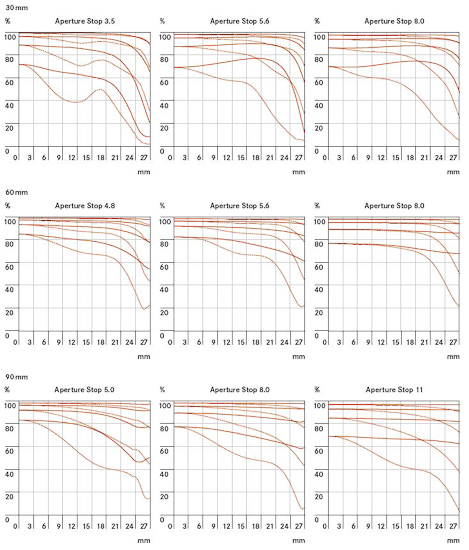 When you hold the lens, you wouldn’t know that you’re moving all that glass around. Zooming, even on the pre-production model, was very smooth with just the right amount of drag on the zoom ring. Leica placed the zoom ring forward of the focus ring where it falls right in between your thumb and forefinger. The rear-placed focus ring is still easily workable by sliding your hand back a few inches. The decision was made to go this way for two reasons. First, this approach was much easier from a mechanical perspective. Secondly, users will spend more time zooming that using manual focus. After, all, the S is an autofocus system. The lens, while shorter in length than the fixed 35mm Summarit-S ASPH, does extend several inches when zooming all the way to 90mm. In spite of the exposed tube, it is still fully weather sealed. 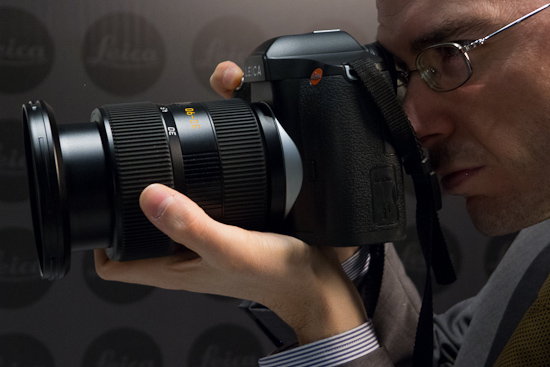 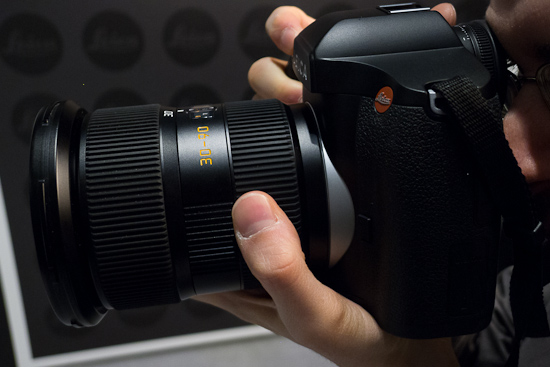 Focus ring is easy to work as well

For me, the real use of this lens isn’t to replace the fixed primes. A 70mm still offers a much faster aperture of f/2.5 in a lighter package. Where the zoom appeals to me is for tripod mounted landscape work. Not having to change a lens and being able to leave on my Schneider 4” filter set, while being able to change my perspective is huge. Less lens changes mean less times I have to dig into my backpack, less times shuffling filters, less exposure of the sensor to dust and moisture in the field and, ultimately, less break in the flow of shooting.

Both new lenses use 95mm filter size. According to Dietmar, the wider filter ring should allow the use of standard filter rings without any vignetting. I will be keen to try this with my Schneider 4” filter rig, which has a lot more depth than a polarizer.

In addition to the lenses, Leica also showed an Elpro close-up adapter for the APO-Tele-Elmar-S 180mm f/3.5. My only gripe about the 180 – it is perhaps the most perfect of the S lenses, after all – is that the close focus just isn’t that close. Leica has answered the call on this one with the Elpro-S 180mm. Just screw the optical adapter on the front of the 180mm and you can now focus your 180 down to 3.6 feet for a reproduction ratio of 1:4.5. Not too shabby. I see this as of real use in fashion and beauty photography as well as adding flexibility while out in the field for landscape and general travel photography. You can carry just the 180 but have near-macro capability without the 120mm. Keep in mind, though, that with the Elpro attached, the camera will not focus to infinity. With a maximum focus distance of 8.8 ft, you won’t just be able to leave it on all day for walk-about photography. Here, the 120mm APO-Macro has a leg up in flexibility. Also impressive is that quality is not degraded at all and neither is exposure. There is no light loss with the adapter as there would be with an extension tube. 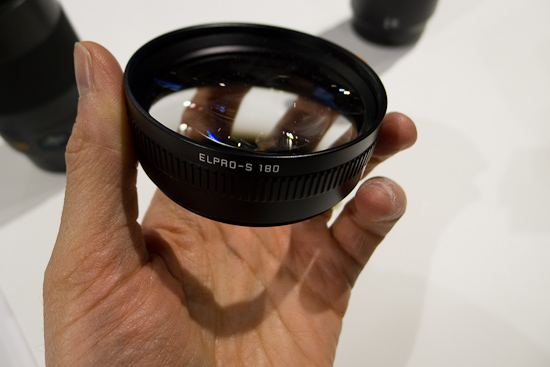 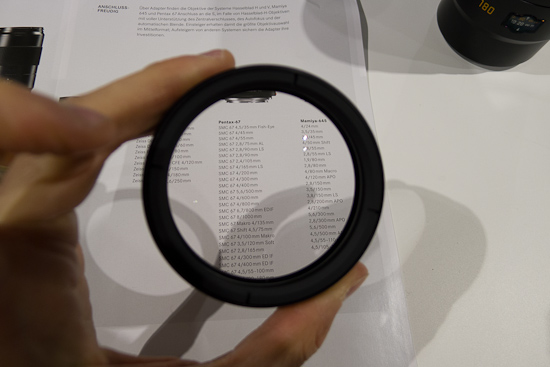 The Elpro makes a nice reading loupe as well…. 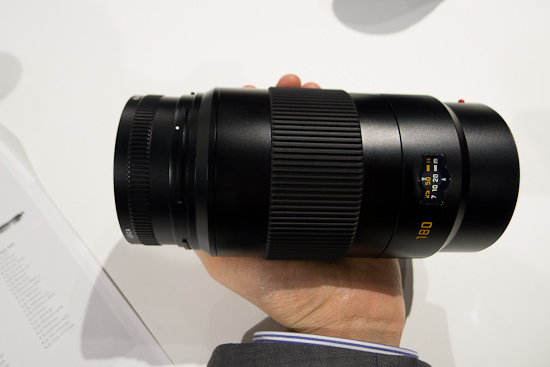 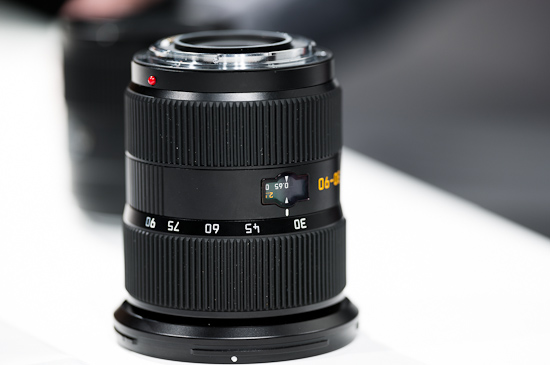 180mm with Elpro at minimum focus distance on S2

Finally, I’ve gotten questions related to the field of view range with the new lenses. While I wasn’t allowed to take sample shots as the models at the show were prototypes, I was allowed to shoot a sequence on a demo S camera and photographed the LCD to give an idea of relative angle of view. 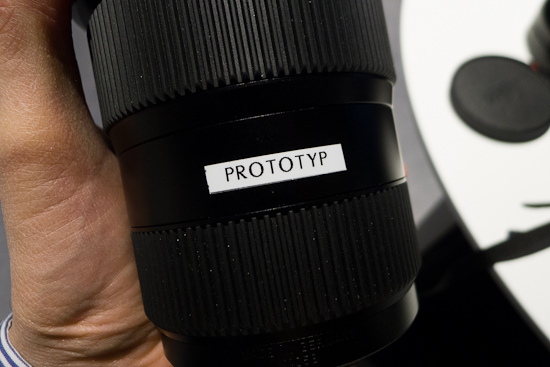 No sample images for me 🙁 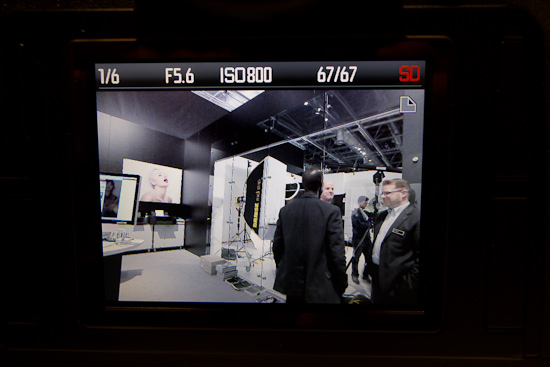 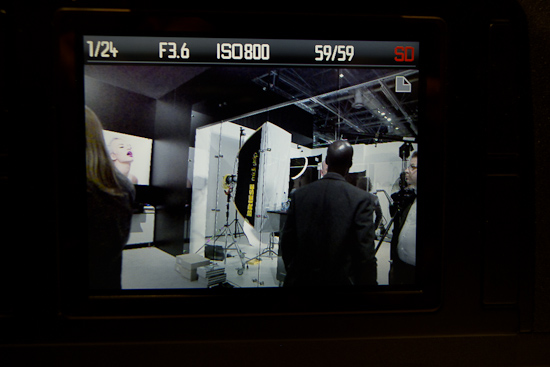 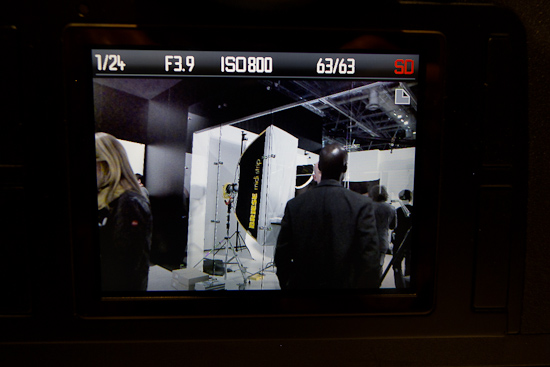 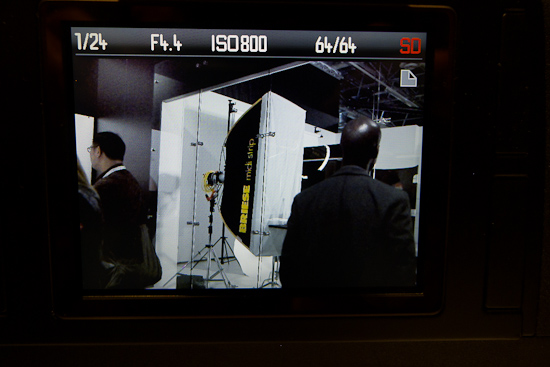 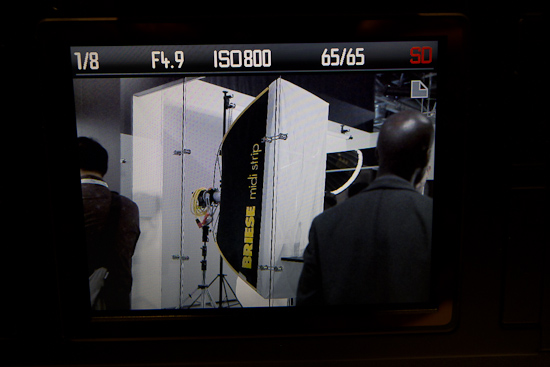 What I found was really fascinating was that the exact focal length and aperture were displayed on the LCD. So, even though there is no 35mm marking on the lens, I was able to use the camera to tell me where the correct zoom position was. Cool feature that eliminates guesswork. The aperture is accurately displayed in 1/10 f-stops. Also nice. 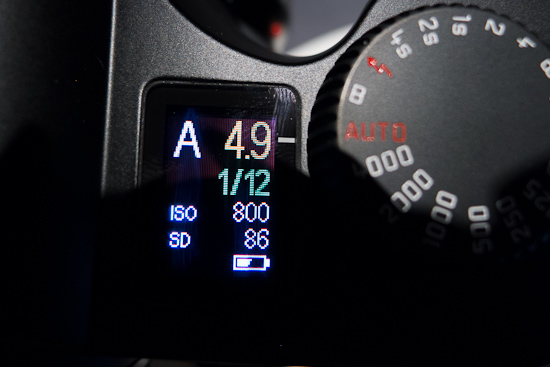 That wraps up my S coverage for now. I will be interviewing S product manager Stephan Schulz in a couple hours and will most likely post the video when I return from Germany (painfully slow Internet does not like 1080p 30 minute YouTube uploads).

All of the new S lenses and the Elpro are available for pre-order from Leica Store Miami. The 24mm, 30-90mm and Elpro are expected to start shipping November 2012 and the TS 120 in January 2013.