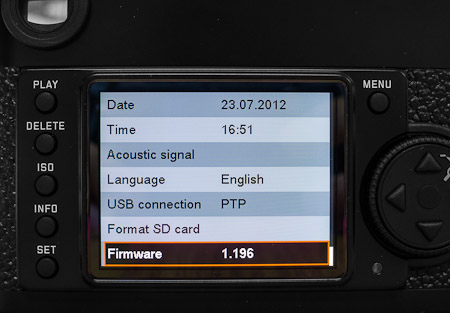 Using old batteries could have lead to camera crashes and banding stripes under certain
conditions with the previous firmware versions. Especially the usage of nearly 6 years old M8
batteries proved to be critical.

It is the nature of Li-ion batteries that the capacity weakens after a certain time.
We recommend replacing the batteries for the M8 and the M9 after 3 years at the latest. Heavy usage can even accelerate the aging process, and then batteries should be replaced earlier.

In case that the total amount of pictures, that can be taken with a certain battery, is significantly lower than before with Firmware 1.196, we recommend replacing this battery.

Please be aware that your settings and your user profiles can be deleted after the firmware update.

Please make a note of your settings and user profiles before you run the firmware update.

What’s your favorite thing about the new Leica M

We’ve got just about anything you’re looking f