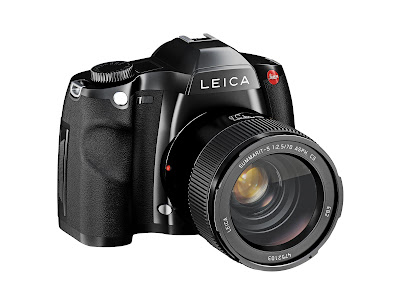 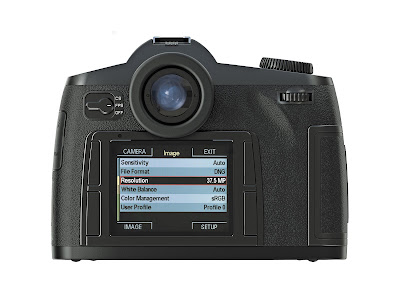 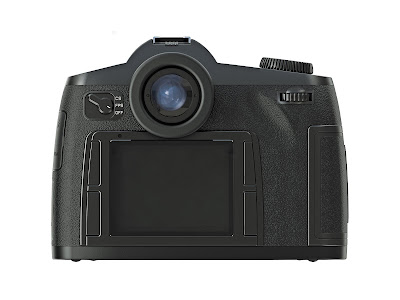 I’ve been looking forward to the Leica VIP launch event for some time now. The cryptic invitations, the tight-lipped Leica reps, the air of secrecy, the Internet rumors. Something big was in the works. Sure, the September 15th announcements from Leica were pretty extensive, but many people thought that they were holding something back for the big show. I knew for a while that there was to be a launch event on the eve of Photokina (tonight), but of course really couldn’t talk about it. Many figured the R10 was going to be shown, while others started wondering what S2 was about. Well, the waiting is officially over. The news is out, I’ve been to the event and I can tell all. 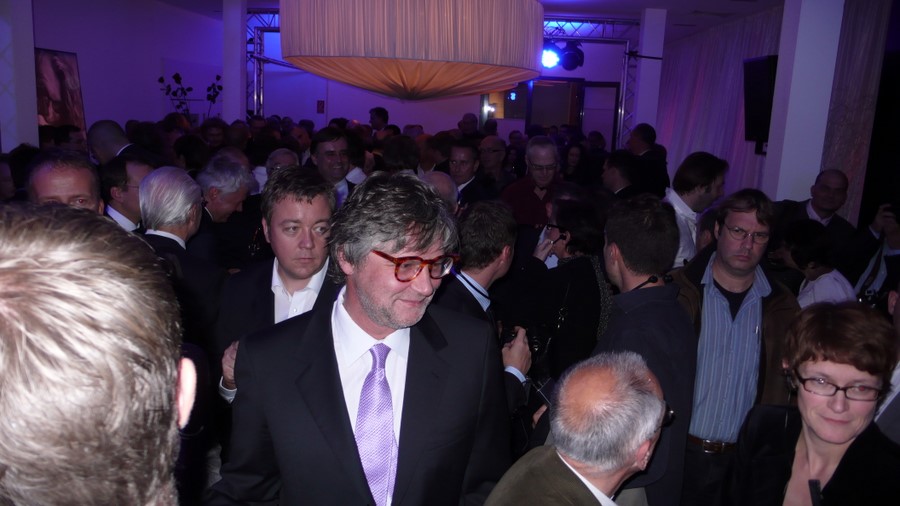 Leica really went all out with this event. From the team of “are you on the list?” greeters to the non-stop champagne, beer, wine and hors d’oeuvres, this was a spare no-expense ordeal. You definitely got the impression that Leica had something to celebrate. Around 7:30, a short promo movie showed on the screen (care of the new Pradovit-D), and then Dr. Kaufmann got up to speak. He revealed the S2, as well as a strategic alliance with Phase One. The black cloth was lifted off the clear case holding the new camera and everyone gathered around to get a peak. And, while there was no shortage of expectations on a new camera body, no one could have predicted that they’d show an entire line-up of new lenses. Nine to be precise. 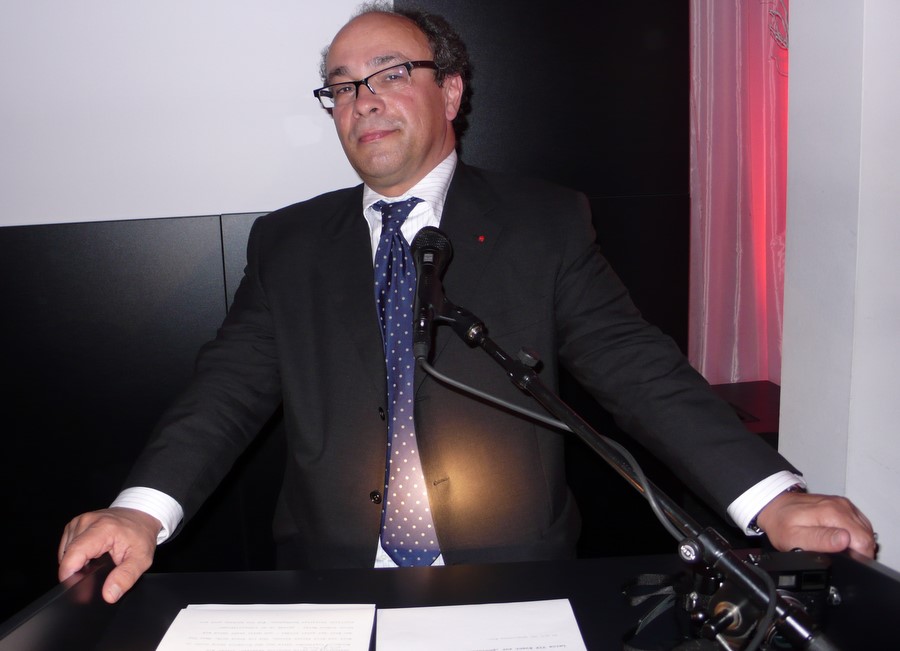 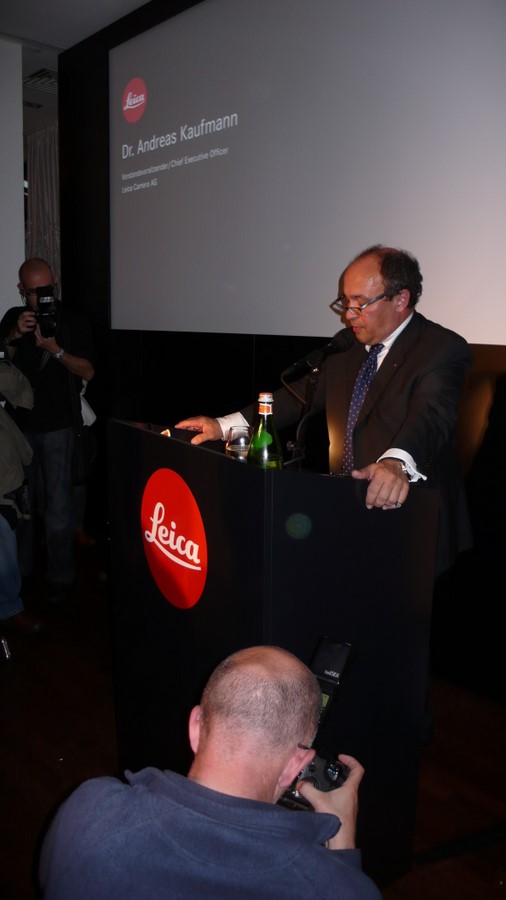 The S2 is what Leica is calling a Leica Pro Format camera, which means medium/mid format to most. They are actively trying to get away from the impression and preconception that the term “medium format” brings to mind. Fair enough. Last Photokina, Hasselblad tried to convince everyone that 36x48mm is full frame in Hasselblad land because there are no crop marks in the viewfinder. Back to the S2. The camera is really quite compact. If you are thinking about the all-in-one Mamiya ZD, think again. It is actually smaller than a Nikon D3 or a Canon 1 series, let alone the ZD or any medium format system to date. In fact, it is about the size of a D700, which is truly remarkable engineering when you consider that the S2 has a 30x45mm sensor, 56% larger than the D700. 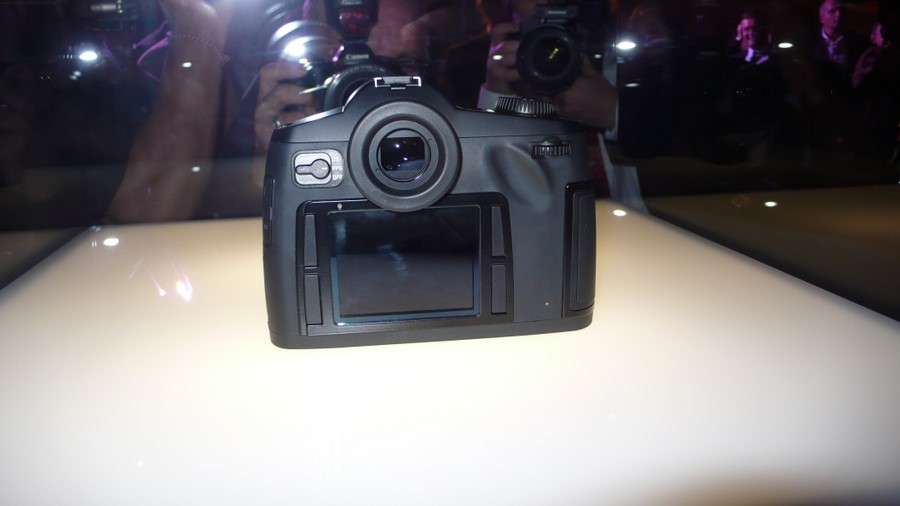 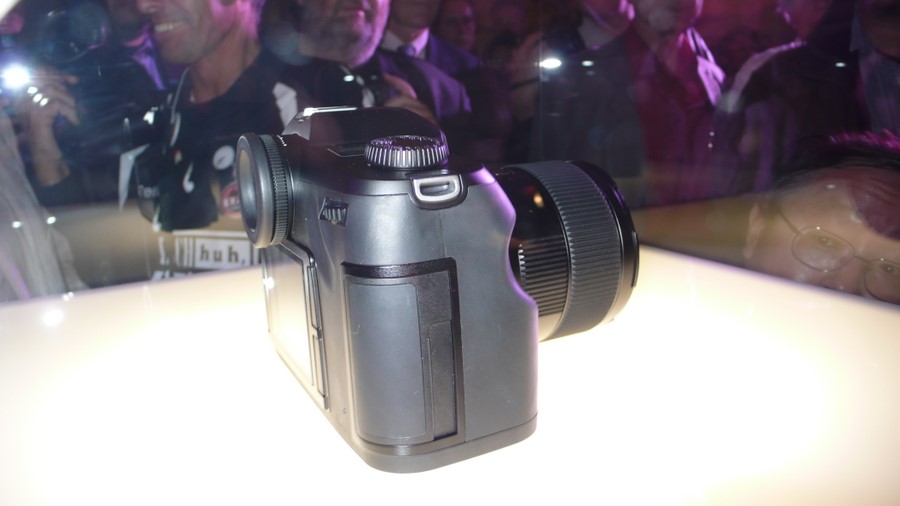 Leica stayed true to their heritage in retaining the 2:3 golden ratio. The 37.5 megapixel Kodak CCD sensor was developed specifically for Leica and uses 6 micron pixels which are the same size as the new P65+. Why 37.5? Well, the biggest mainstream competition comes from Hassy and Phase with their 39MP offerings.

The S2 boasts the ability to simultaneously shoot DNG+JPG in camera, and produce exceptional quality JPGs to boot. Most MFD systems aren’t able to generate decent JPGs in real time. This feature and the ability to shoot 1.5 fps start to separate the S2 from the MFD pack. Both advances are made possible by Leica’s exlusive Maestro image processing chip. The size of a fingernail (Kaufmann held one up), the Maestro is a dual core beast that can churn through almost 40 megapixels of data in real time while using very little power. And the new chip also offers less noise than competing MFD systems.

The ergonomics of the camera were guided by professional photographers’ input. Leica took a very customer-focused approach, while maintaining the clean and simple Leica design that we have all grown to love. You won’t find lots of buttons or knobs on the S2. Many will notice that Leica seems to have borrowed the four button soft-key interface found on Phase backs. Don’t read too much into this. The project was well underway before the Phase deal was in the works. Basically, according to Leica, this was what their focus groups preferred. The best form of flattery…. We do also have some new additions like full weather sealing, AF (single point only), color OLED status screen, dual card slots (SDHC+CF), HDMI out, and a quick access switch for the shutter mode. There is also a vertical power grip that holds a second battery, which attaches to the S2 with a simple motion (with no threading with a thumb wheel).

The S2 uses a dual shutter system. The camera has a built-in focal plane shutter that goes up to 1/4000th sec. Some of the lenses will be CS lenses, short for Central Shutter. These have leaf shutters that will be able to offer faster flash sync speeds. 1/500th is currently the starting point under consideration, while the product team’s sights are set a bit higher. We’ll have to wait for official specs on that, but the goal appears to either match Hassy at 1/800th or best them and match Schneider PQS lenses at 1/1000th. The non-CS lenses have no internal shutter. Perhaps we should go over the new lens line. 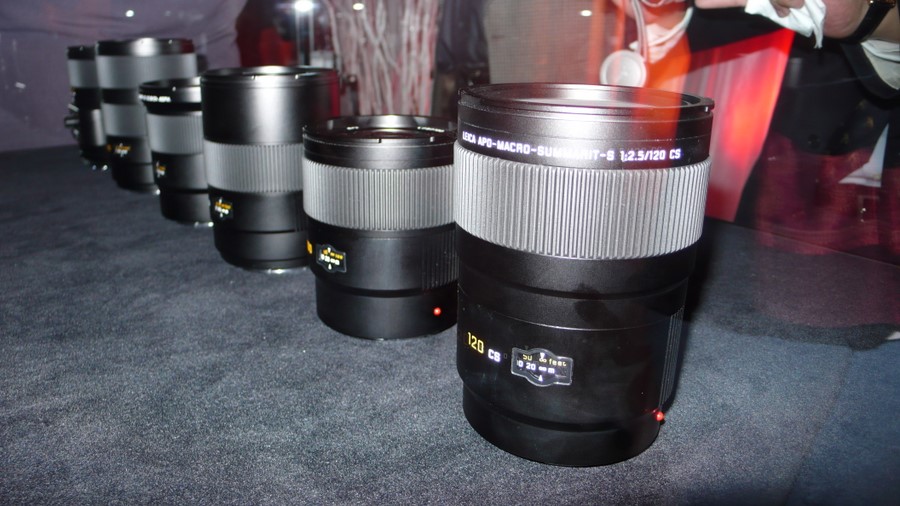 These four lenses will be the first to launch, simultaneously with the camera. The next grouping of lenses will come a few months later.

Pretty impressive lineup. The CS lenses already give wide-angle, normal, macro, and tele. Then, the standard S lenses bring extreme wide angle, long tele, fast standard wide-to-tele zoom, fast portrait lens, and a wide tilt-shift. Word is that Peter Karbe, the head optics designer has been very hard at work. The performance of these new lenses is being heralded as reference class optics with no measurable distortion or vignetting anywhere in the frame, and no software correction needed to optimize the performance. This last part is a certain jab at Hasselblad. MTF charts of these lenses are supposedly totally flat with no drop. Obviously Leica is doing what they do best – making the best optics in the world.

The S2 and S system was certainly the toast of the town tonight here in Cologne. But, other Leica goodies were out to play as well. Stefan had a shiny new M8.2 with the new 21mm f/1.4 Summilux ASPH and 21mm finder. I took the liberty of borrowing the camera for a few minutes. The 21mm lux is surprisingly well balanced on the M8. It is nowhere near as heavy and large as the product pictures make it out to be. The camera wasn’t front heavy at all, and focusing was no problem through the viewfinder. The easy EV worked as advertised and the discrete advance with the quiet shutter felt more like an MP than my trusty M8. I did learn that snapshot mode doesn’t work with the 21mm. It only works from 24-90 focal lengths. Of course, the M8.2 looked as good in person as it did in pictures. I want one. 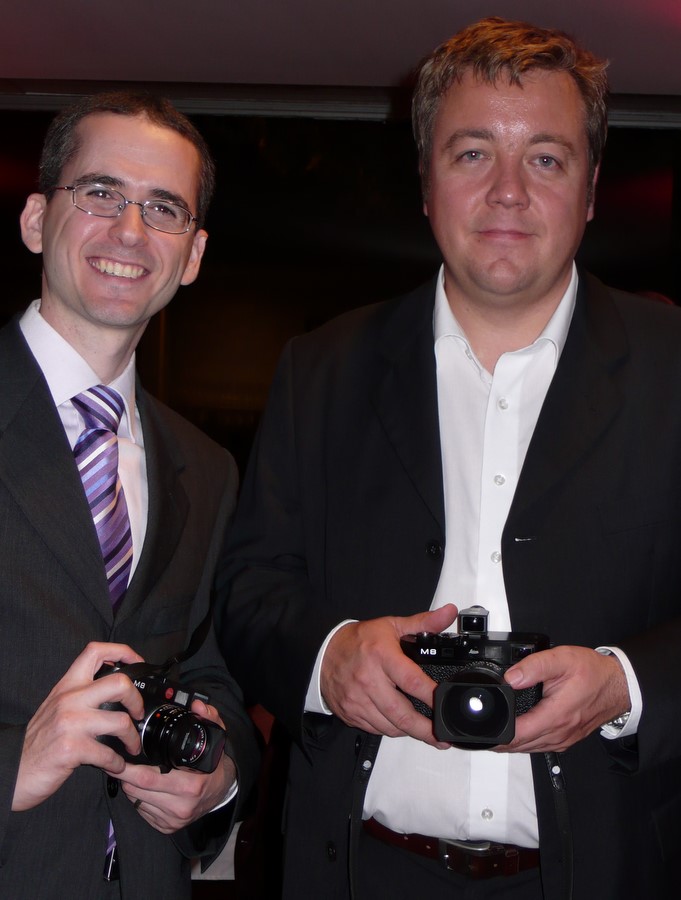 As I mentioned earlier, the Pradovit-D also made a discrete, ceiling-mounted appearance. Video quality was outstanding, and I expect to see more tomorrow in the Pradovit theatre

Maike, the S2 (and R10) product manager was toting around a D-Lux 4, which she gladly handed off to me. I didn’t shoot any pictures off but I can say that it felt really nice and solid, just slightly heavier than the D-Lux 3 that I brought with me. She was extremely helpful in answering my questions about the new system and the R10. Hmmm, did someone say R10? 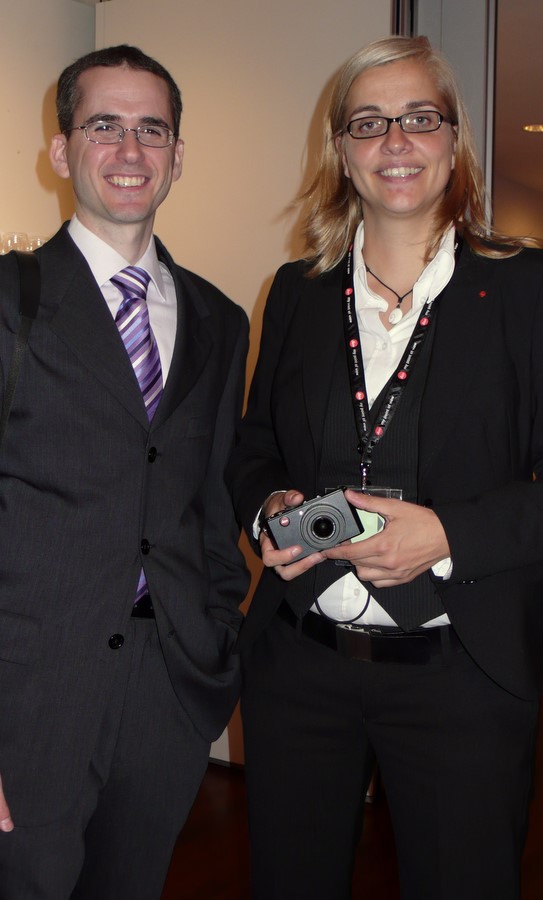 The R10 has already been green-lit, fast-tracked, whatever. Technology from the S2 will find its way into a smaller body with a 24x36mm CCD chip that takes all current R lenses (no adapter). New AF R lenses will be introduced as well. The S2 will launch in Summer 2009, with the R10 coming (most likely early 2010). Why did Leica go with the S-System at this point, instead of the R-System? They didn’t want to launch a me-too product. If the full frame R10 came out now, everyone would compare it to the FF Canons and Nikons. Does it shoot as fast? Does it have low noise at 6400 ISO? Does it slice bread? Etc. Instead, the S2 creates a new, unique flagship product for Leica. It is a true professional tool, not just a fascination. All the R&D and tech that went into the S can be carried into the R system. Think Nikon’s approach with the D3/D700/D300 and this may be where Leica is headed.

So what’s the deal with Phase One? The truth is that I’m not sure, right now (and neither is Leica or Phase). The S2 was developed 100% in-house. Leica is very proud of this. The hardware engineering to the optics to the firmware was all done in Germany. With the Phase deal, the S2 will shoot tethered into C1, which is nice, but they certainly didn’t create this product – Leica did. There was mention of Phase dealers carrying the camera, in addition to Leica dealers, but this is not certain right now. Time will tell..

This info has to do for now. It is almost 4:00 AM local time and I haven’t slept since yesterday. I got a VIP badge that allows me to handle one of the 15 working (yes, they actually take pictures folks) S2 prototypes and some of the CS lenses in a back area. I’m on the list, apparently. Look for the Leica booth update tomorrow with more of the new M products and hands-on with the S2.